Manchester United suffered a second consecutive slip-up in the Champions League on Wednesday evening as CFR Cluj came close to reaching the last 16 by the most unlikely of routes – a shock away win at Old Trafford.

In a largely forgettable game, the Romanian side scored a goal that should linger much longer in the memory – a second-half screamer by Luis Alberto. The Reds had no response to that, even if Mario Felgueiras was by far the busier goalkeeper in the second half, often besieged at the Stretford End by the likes of Wayne Rooney, Ryan Giggs and Paul Scholes. Cluj must have thought a clean sheet would be enough to take them into the last 16 with group winners United but alas their dream was shattered by Galatasaray winning the other concluding fixture away to Braga.

Sir Alex Ferguson’s programme-notes promise of “further European blooding” brought a first Champions League start for centre-back Scott Wootton – he made his debut as a substitute in the first meeting, in Romania – and another outing for Alexander Büttner at left-back. Meanwhile Marnick Vermijl, the young Belgian, watched from the bench in the hope of making his European bow. 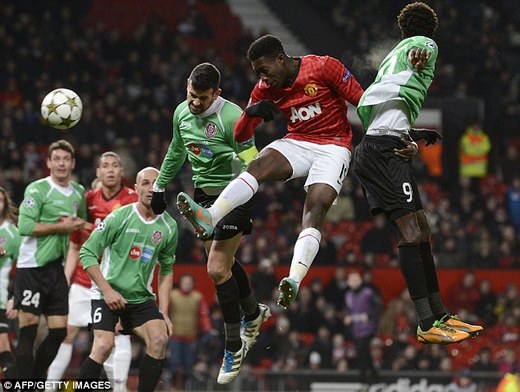 Danny Welbeck is an experienced continental campaigner by comparison and he almost notched the third Champions League goal of his career early on when he made an intelligent run to the near post and glanced a header fractionally wide from Ryan Giggs’ right-wing corner.

Giggs’ ball into the opposite area also created an opportunity, for Cluj, when Chris Smalling conceded possession and then diverted the resulting shot goalwards. Fortunately for the recalled defender, David De Gea made a reactive stop on his return to action, diverting the effort with his left thigh.

With the crowd volume and temperature dipping together, the game needed a lift and not the enforced lull when Nick Powell received a heavy blow to his torso. Fears of a rib injury dispelled, the midfielder played on and unleashed a handful of shots with typical confidence. One led to a shout in vain for handball, another driven into the ground presented Smalling with a half chance, his flicked header landing on the roof of Cluj’s net.

Still bidding for a place alongside United in the next round, the Romanians mounted offensives of their own, only to be twice thwarted by two men born on Merseyside. Firstly, Wootton matched Modou Sogou for pace and blocked his shot with a brilliant challenge; next, Wayne Rooney took his deeper role to extremes with a timely clearance inside the six-yard box. De Gea also had another save to make when Cluj defender Felice Piccolo made a powerful connection with a corner and headed down at the young Spaniard’s feet.

De Gea’s opposite number Mario Felgueiras denied both Welbeck and Rooney in the same spell of United pressure shortly before half-time, acrobatically palming away the former’s header and then the  latter’s chip, both with his left hand. But the Cluj keeper and captain should have been beaten when Javier Hernandez kept the attack alive and whipped a cross into the danger zone – Smalling’s reaction to nodding the ball off target said as much. 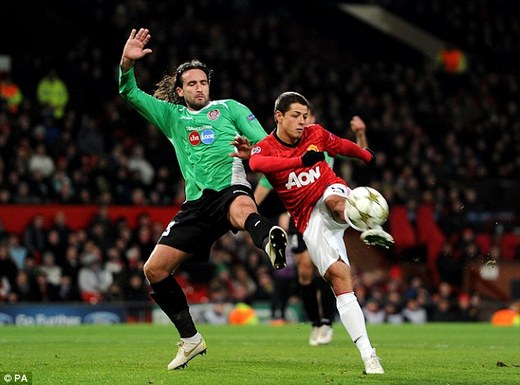 Sir Alex made his first substitution just before the break, sending on Paul Scholes for Tom Cleverley who had presumably picked up a knock.

Scholes’ challenge early in the second half was to try and unlock a Cluj defence that appeared to be set up for a draw. But appearances can be deceptive – just 11 minutes after the interval, the Romanian side broke out to devastating effect when the Reds lost possession inside the centre circle. Luis Alberto gleefully seized the initiative, surged forward and despatched a sensational shot that swerved past De Gea before flying in off the right-hand post.

Cluj’s small band of enthusiastic fans, some in white and maroon perm wigs, celebrated wildly as their heroes did much the same on the pitch. Some of the home faithful, meanwhile, could only applaud and perhaps draw comparison with past rockets from David Trezeguet of Monaco or the great Gabriel Batistuta of Fiorentina on this European stage.

The United players, however, just had to get on with the task of trying to wipe out the latest of countless deficits this season. Federico Macheda, a scorer at Southampton for the Reds’ Under 21s on Monday night, became the fourth United striker on the pitch when he replaced  Powell. But clearcut chances were few and far between, even if Felgueiras had to parry a free-kick from Giggs, block a cross as Jones.pressed forward from right-back and pluck Rooney’s rising shot out of the air.

Cluj were clinging on to qualification at this point but this valiant effort proved in vain when Galatasaray took the lead against Braga in Portugal. It was a cruel end to the evening for United’s visitors but on this evidence they’ll fare well when they drop into the Europa League. As for the Reds, a better performance and a bigger game surely awaits when the Champions League returns in February.