Manchester United will be among the names in the UEFA Champions League group-stage draw after sealing a 4-0 win on the night and a 7-1 aggregate victory against Club Brugge.
Wayne Rooney answered his doubters in the press by scoring a clinical hat-trick in Belgium before Ander Herrera notched his first goal of the season with another neat finish. The play-off result means Louis van Gaal, the players and supporters can now look forward to returning to Europe’s top table and a competition that has been synonymous with the club since the reign of Sir Matt Busby.
Louis van Gaal made two changes to his team by recalling Michael Carrick in place of Bastian Schweinsteiger and starting Herrera for the first time this season. Both men utilised their passing abilities in the opening exchanges as the Reds controlled possession on a pitch that had been heavily rained upon in Bruges, where the weather was almost biblical leading up to the match.
Despite United’s positive start at the Jan Breydel Stadium, named after a local butcher who led a 13th-century uprising, it was the hosts who created the first chance when Luke Shaw blocked Tom De Sutter’s low volley at the back post, an effort that was more than enough to cheer a home crowd that had provocatively sang along to Liverpool anthem You’ll Never Walk Alone before kick-off. 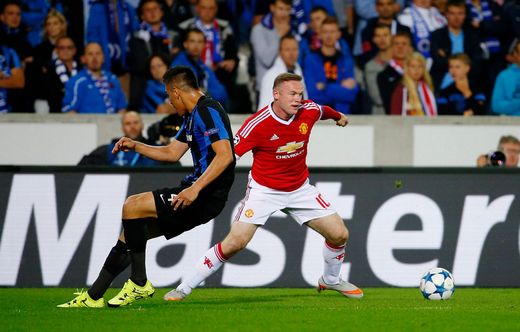 The Reds quickly silenced the home supporters, though, by breaking the deadlock on 20 minutes as Memphis Depay, United's star in the first leg, produced another moment of individual brilliance by dribbling in from the left wing and cutting a neat pass inside for Rooney, who calmly chipped a neat shot over the goalkeeper to score his first goal of the season from around eight-yards.
Rooney’s opener meant Brugge could only progress in normal time with a 4-1 victory and, although their hopes were bleak, the home side showed tremendous spirit and almost levelled when De Sutter forced a smart stop from Sergio Romero on 40 minutes, before the Argentinian goalkeeper brilliantly clawed the ball away from the feet of Boli Bolingoli when he was played in moments later. Memphis also had two efforts deflected wide to cap an intriguing first half in Belgium.
HALF-TIME STATISTICS
Possession: Club Brugge 38% United 62%
Shots: Club Brugge 5 United 11
Shots on target: Club Brugge 1 United 2
Corners: Club Brugge 1 United 2 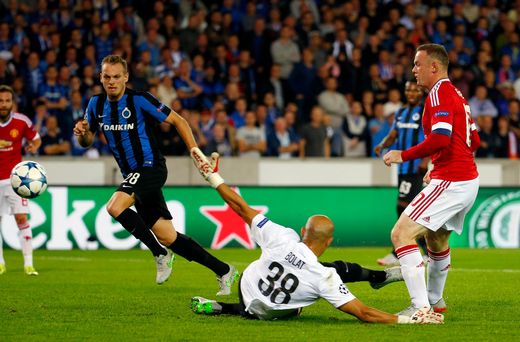 The second half began with Schweinsteiger replacing Januzaj in midfield and the former Champions League winner with Bayern Munich quickly slotted in alongside Carrick, perhaps with a view to regaining total control of the tie. Van Gaal’s substitution paid immediate dividends as United capitalised on a misplaced pass from Brugge to swiftly score on the counter, as a more advanced Herrera slipped a neat pass inside for Rooney to bag his second goal with the simplest of finishes. 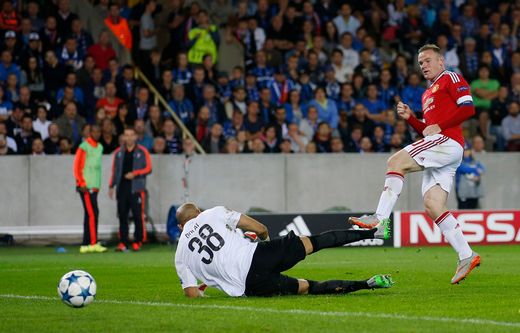 It was a disheartening restart for the home team and things went from bad to worse for them when the captain claimed his hat-trick just minutes later, by beating the offside trap and latching onto Mata’s intricate pass to slot a low finish underneath the goalkeeper. It was his 35th goal in European competition and only Ruud van Nistelrooy has netted more for the club, with 38 to his name.
United were running amok by this point and the Reds were cutting through the Brugge defence like a hot knife through butter, which led to Herrera scoring a fourth with a neat composed finished from Schweinsteiger’s excellent through-ball. The Spaniard then exited to an ovation from the travelling Reds as Javier Hernandez entered the fray, hoping to add his own name to the scoresheet. 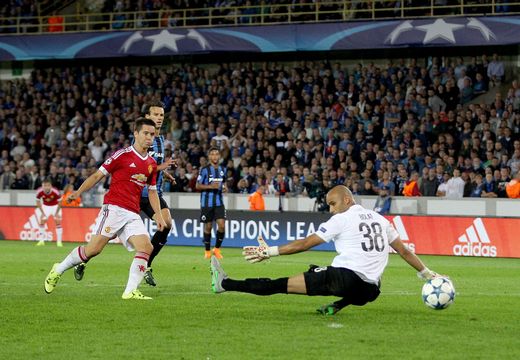 Although Brugge hit the crossbar with an powerful volley from Tuur Dierckx, this play-off tie was over midway through the second half and the Reds should have scored a fifth from the penalty spot on 80 minutes, when substitute Javier Hernandez slipped and shot wide after Oscar Duarte was somewhat harshly penalised for handball by the referee Antonio Miguel Mateu Lahoz, a Spanish PE teacher.
Chicharito squandered another excellent opportunity to open his account in the 90th minute when knocking over Ashley Young's in-swinging cross, but the Mexican's miss did little to dampen United's spirits following an extremely beneficial night in Bruges. All eyes are now on Thursday's group stage draw in Monaco. 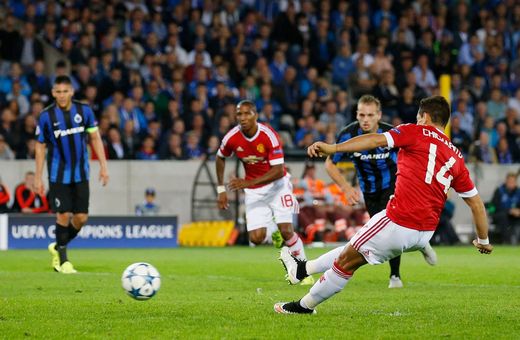 United will be in Pot 2 on Thursday and will be drawn against one team from Pot 1, which includes big guns Real Madrid, Atletico Madrid, FC Porto, Arsenal, Manchester City, Valencia, Bayer Leverkusen.

Van Gaal: "Every goal shall give confidence to every player and to Wayne. I am very happy for him... He has the best mentality that you can imagine. Such players of that level shall always come back."

Rooney: "I know my qualities and what I bring to the team; even if the goals don’t go in, I still bring a lot for my team-mates. Thankfully, I’ve got chances tonight and taken them, but I wasn’t worried."

Herrera: "It’s very important for a midfielder to score and help the team. My goal is not the most important thing - it is that we’re in the draw and we can bring Manchester United to where we deserve."

#MUFC will be among the names in the UEFA Champions League group-stage draw after sealing a 4-0 win on the night and a 7-1 aggregate victory against Club Brugge.