United celebrated a 100th win in the Champions League, and a second successive victory of this season’s campaign, in Romania on Tuesday night after a Robin van Persie double secured a hard-fought 2-1 victory over CFR Cluj.

By this point last season, the Reds had mustered just a couple of points, now Sir Alex’s men, who sit top of Group H, have six and are well on their way towards qualification for the knock-out stages.

Things could not have started much worse for the visitors – something which has been a common theme this season – when Pantelis Kapetanos gave the home side a shock lead on 14 minutes with a close-range finish. Robin van Persie drew the Reds level just before the half-hour, albeit deservedly but somewhat fortunately in the manner he scored it via his shoulder, before the Dutchman poked home on the volley soon after the restart.

Sir Alex had promised he would field a strong team in the lead-up to the game and he stuck to his word with near enough his strongest XI available starting at the CFR Stadium. There were six changes from the side that lost out to Tottenham in the league at the weekend, although three of those were enforced with Ryan Giggs, Michael Carrick and Paul Scholes all feeling under the weather and missing the trip altogether. They were replaced by Anderson, Tom Cleverley and Darren Fletcher, while Wayne Rooney came in for Shinji Kagawa and Javier Hernandez replaced Nani. David De Gea took up the spot between the posts with Anders Lindegaard  dropping to the bench.

The Reds made a bright start in terms of possession, but there was only really a half-chance for Anderson, which he dragged wide from the edge of the area on 10 minutes, to show for it. Much had been made about the poor starts United have made to a number of games this season in the pre-match press conference and, unfortunately, that unwelcome trend continued when Cluj took the lead – from their first real attack - on 14 minutes through Kapetanos. And it was all too easy for the home side.

After the ball had been brilliantly spread wide to Modou Sougou, the winger raced down the right channel before firing a low cross into the path of Kapetanos, who swept the ball past De Gea.

The Reds weren’t about to let this latest of early setbacks get them down though and the ideal response was almost immediate with Rooney seeing a shot parried by Mario Felgueiras and both Anderson and van Persie flashing efforts just wide.

You felt an equaliser was not far away, particularly given Cluj had only kept two clean sheets in their previous 12 home games, and it duly arrived, via some good fortune, on 29 minutes when a Rooney free-kick from the left wing flicked off van Persie’s shoulder and looped in over Felgueiras.

The Dutchman went close to notching a second six minutes later when a Hernandez pass put him clear, but his left-foot strike was saved by Felgueiras.

The Reds ended the half on top and began the second in the same fashion and it was the combination of Rooney and van Persie which undid Cluj once again, four minutes after the restart. 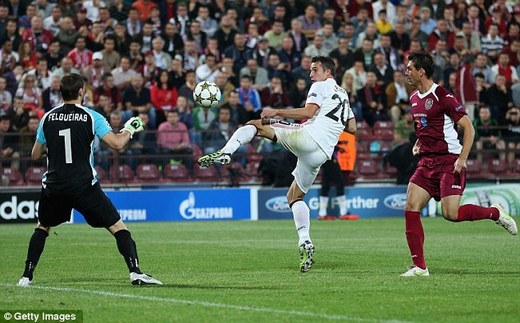 Rooney, who was starting alongside van Persie for the first time, floated a lovely ball over the top for the Dutch international who stuck out a boot and flicked the ball home on the volley past the helpless Felgueiras.

They had seen little of the ball up to that point, but Cluj began to rally soon after which, coupled with some shakiness in the United backline, led to a couple of decent openings. After Gabriel Muresan had crossed for Kapetanos to fire over, De Gea reacted brilliantly to tip Cadu’s header, from a Rafael Bastos corner, over the bar.

At the other end, van Persie nearly grabbed his second hat-trick of the campaign on 71 minutes when Rooney, out wide on the left, fired a low cross towards his onrushing strike partner, but he was muscled out of it by a defender and unable to make contact with the ball.

United’s defensive injury curse reared its ugly head as the game ticked towards the final 10 minutes with Jonny Evans unable to continue after  picking up a knock. Scott Wootton, making his Champions League debut, replaced him.

Cluj offered little threat as the game neared its conclusion, but the Reds were mighty relieved to see De Gea pull off a superb fingertip save in injury time from Rafael Bastos, who flew in at the near post to meet Ivo Pinto's cross and send a diving header goalwards. Thankfully, that proved to be Cluj's final flourish as United held out for a vital three points and took another important step towards booking a spot in the latter stages of the competition.