Manchester United were knocked out of the Champions League against Bayern Munich, losing 3-1 on the night and 4-2 on aggregate, despite landing the first blow with a stunning Patrice Evra goal to give the Reds the lead at Allianz Arena.

However, the advantage lasted a mere 22 seconds after the restart in a dramatic, frenetic and ultimately decisive 10-minute spell in which Mario Mandzukic and Thomas Muller put the home side in front. Arjen Robben then added a third on 76 minutes to all but extinguish United hopes of progress.

The Reds had defended manfully during an ideal away display in the first half. Bayern typically had the vast majority of play but Chris Smalling led a resolute Reds defence in the opening 45 minutes. 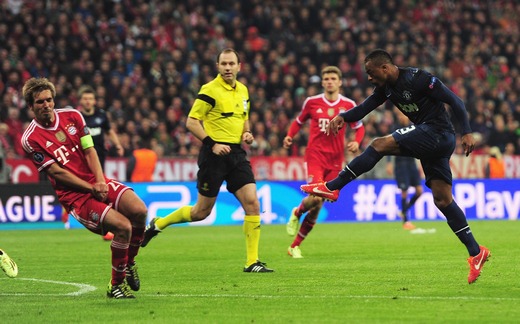 So cagey was the contest that it took until the 55th minute for either side to test the opposing goalkeeper. That came via a long-range Shinji Kagawa effort that Neuer saved with ease. But it sparked belief in United and within two minutes David Moyes' men were in front. It was Evra's third strike in a fruitful season in front of goal – and perhaps the best he'll ever score. Valencia's cut-back fell to him on the far edge of the box and he hit it sweetly, first time, in off the bar.

Bayern hit back immediately through Mandzukic. In that spell, the tie could have tipped either way. Rooney spurned a chance to regain the lead with a scuffed quick-fire shot from 12 yards – one he might have converted if fully-fit – but Bayern made United pay with two knockout blows. European football is no guarantee next season and this loss hurts more because of it, but the Reds went toe-to-toe with Bayern and can walk out heads held high.

The Match: Reds bow out

The match It was a cagey affair for almost an hour until the game burst into life thanks to Patrice Evra’s brilliant goal on 57 minutes. United had repelled all previous Bayern advances, with Chris Smalling typifying a resolute defensive performance. Wayne Rooney clearly wasn’t fully fit and, despite a pain-killing injection, looked like his toe injury affected him after spurning good chances in either half. It was a chance United had to take. The key for Bayern was in hitting back immediately after the restart following Evra’s goal through Mario Mandzukic. It not only loosened United’s temporary grip on the tie, it inspired Bayern to go on and win it. Within ten minutes they were in front through Thomas Muller and eight minutes later the tie was wrapped up by Arjen Robben. 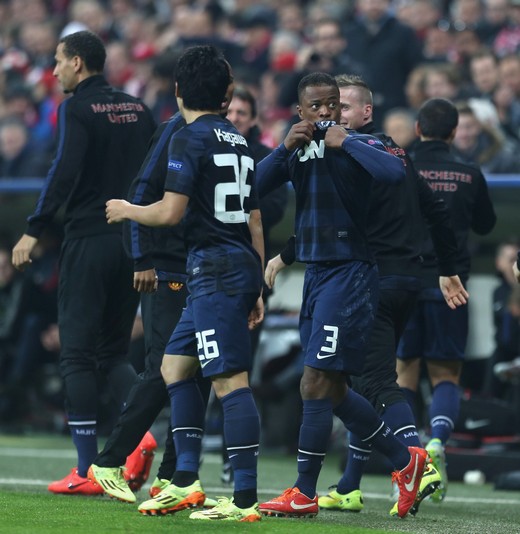 The goals Evra’s strike was absolutely perfect, a thumping first-time left-foot shot from 20 yards that crashed in off the crossbar. It’s just such a shame that it came in a 3-1 defeat of this magnitude. More pertinent was the reaction to it – United’s and Bayern’s. The Reds had to see out that spell immediately following the goal and ride the wave of euphoria from such a spectacular strike; Bayern had to find a way back into the game. And did. Ruthlessly.

Star men Chris Smalling and Phil Jones both drew praise from boss David Moyes for their valiant defensive performances, while Shinji Kagawa caught the eye with his clever, agile play The opposition Slick passing and dominance of possession came as standard. Bayern moved the ball well in tight spaces in attack and looked dangerous every time they went forward, particularly down the flanks with Robben and Ribery. That said, at times in the game, United looked to have got under their skin and after Evra scored it would be a test of their character. Unfortunately for United, they responded emphatically.

Sub-plot United boast the best away record in the Barclays Premier League this season and won 5-0 on the last trip to Germany (earlier this season against Bayer Leverkusen). Winning at Allianz Arena, against the current European champions, is another matter though, so this was always going to be a tough task. Evra's stunning opener gave the travelling Reds hope but it just served to awaken the beast: 20 minutes later, Bayern had scored three.

Move of the match A neat move in the 17th minute had the ball in the back of the net. Shinji Kagawa’s clever touch took him away from his man and after moving the ball out to the left, Rooney crossed to the far post where Antonio Valencia slid in to beat Neuer. But he was offside after Dante stepped up.

In the stands The orchestrated Bavarian support made for a brilliant atmosphere in this impressive, modern arena. United’s fans were up in the heavens with plenty of flags on show and in fine voice. The one moment of ecstasy, following Evra’s goal, was sadly short-lived.