David Beckham and Paul Scholes combined to great effect to help a Great Britain and Ireland side earn a 3-1 win over a Rest of the World XI in the Match for Children in aid of Unicef at a sodden Old Trafford.
The illustrious former Manchester United team-mates seemed on the same wavelength once more as skipper Beckham delivered a perfect cross for Scholes to head home and break the deadlock, before the pair linked up again in the second half to tee up Michael Owen to double their side's lead.
The Rest of the World pulled one back almost instantly through Dwight Yorke, but a mistake from the Rest of the World substitute goalkeeper Raimond van der Gouw allowed Owen to grab his second to seal the victory in front of a sell-out 75,381 crowd.
Sir Alex Ferguson returned to the Old Trafford dugout to take charge of the Great Britain and Ireland XI, which saw captain Beckham joined by Manchester United heroes Ryan Giggs, Phil Neville, Nicky Butt, Darren Fletcher and Phil Neville - while John Terry partnered Jamie Carragher in central defence.
Carlo Ancelotti was manager of the Rest of the World XI, which included legends such as Luis Figo, Clarence Seedorf, Patrick Kluivert, Ole Gunnar Solskjaer and Ronaldinho. Frenchmen Zinedine Zidane, Christian Karembeu and Patrick Vieira did not take part following Friday night's tragedy in Paris.
It was all Great Britain and Ireland from the off, with the Rest of the World's Mikael Silvestre forced to block Fletcher's powerful drive on the line, after Edwin van der Sar had saved Peter Crouch's close-range effort. 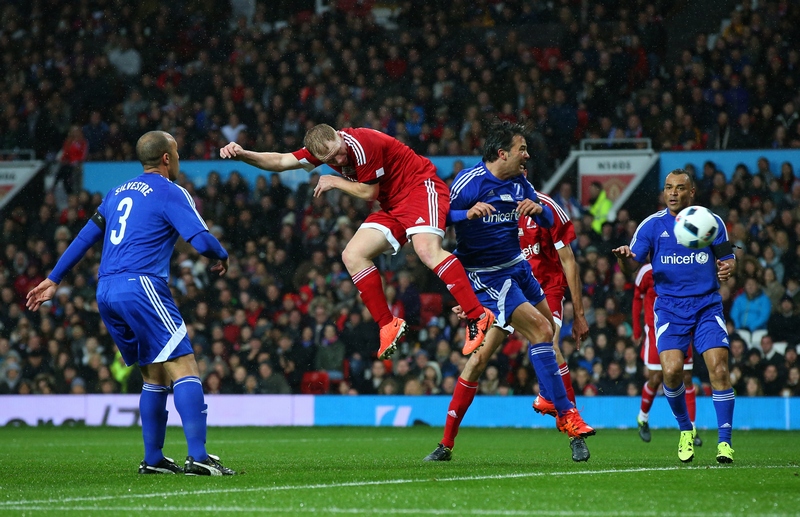 But Beckham and Scholes soon rolled back the years to break the deadlock. Beckham picked the ball up on the right, and whipped a perfect cross into the path of the onrushing Scholes, who arched his back and guided his header past the despairing dive of Van der Sar. Scholes sliced two volleys wide as Beckham's Reds pushed for another, with plenty of camaraderie between old friends on show in the pouring rain.
Terry would have proved an unpopular scorer in these parts, but his acrobatic effort ballooned over from close range midway through the first half.
Just after the half hour, the Rest of the World XI came agonisingly close to finding an equaliser, with Figo curling just past the post after a neat interchange on the edge of the box.
Beckham responded to the calls for him to shoot every time he touched the ball by curling an effort just over from distance as the half drew to a close.
The rain became even more torrential after the interval but the flicks and tricks remained commonplace, with Ronaldinho dazzling the crowd with some superb footwork and trademark intricate passing.
The Brazilian almost equalised for the Rest of the World six minutes into the second half but his goalbound effort was tipped wide by substitute David Seaman. Beckham had a hand in the Reds' second, as he once again searched out Scholes with one of his trademark crosses. This time, Scholes pulled the ball back for Owen, who converted from close range at the second attempt. 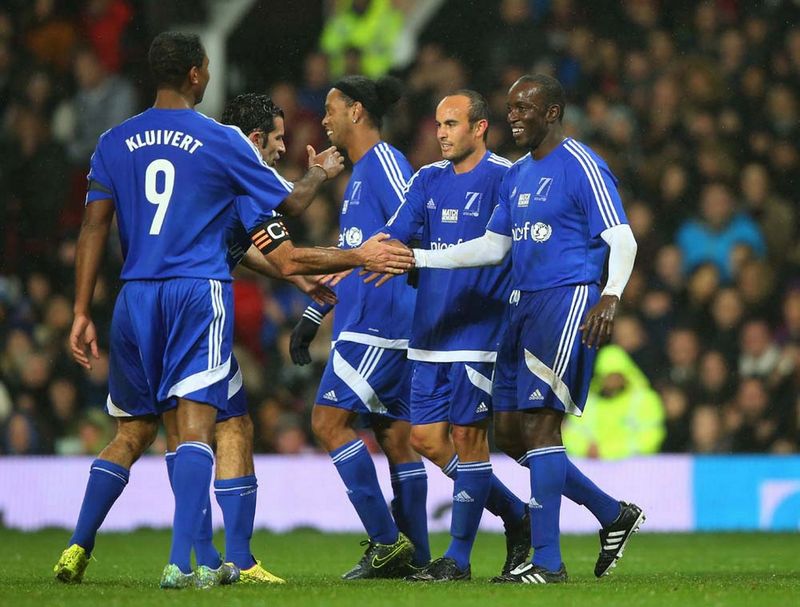 A fine finish from Yorke then got his side on the scoresheet after he was picked out perfectly by Landon Donovan, but the Rest of the World rarely threatened thereafter. The loudest cheer of the afternoon came when Beckham senior was replaced by Beckham junior, as Brooklyn came on as a substitute to replace his father to rapturous applause. And for one last cheer, Beckham senior returned to the fray to link up with his son on the right, with the pair working together for a cross into the box which Van der Gouw fumbled, allowing Owen to tap home. Scholes' delicious chip from the edge of the box came back off the crossbar in the dying moments on an afternoon that provided plenty of entertainment and importantly all for a good cause.

David Beckham's Great Britain and Ireland side won 3-1 against the Rest of the World at Old Trafford in the UNICEF '...